Recharged in the Rockies...

There's nothing like a couple nights of good sleep, good eats and a few good hot showers to get you recharged after a marathon roadtrip.  To say I was worn out after 1600 miles in 2 days, including a snowstorm from Toledo to Chicago is an understatement!  The past couple days were jam packed with windshield time and short stops as there was little time to waste if I was to get back on schedule.

Running a couple of days behind I had to drop a few brewery visits from my trip but still snuck in a stop at Shoreline Brewpub in Michigan City, IN to trade beers with Mike Lahti from Figure 8 Brewing, an old brewery friend from my Vermont days with Harpoon. I'll have to comment on Figure 8's beers after I try them this weekend but Shoreline's Beltaine Scottish Ale lived up to its 2x GABF Silver Medal honors. Their Smokestack Porter was my favorite, not too smoky and delicious! 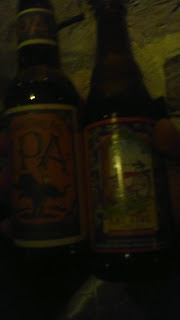 It isn't easy to just stop and rest when you get to a place so brimming with great beers to try.  Running on pure adrenaline I reached Larimer St. in Denver just in time to catch Antennas Up at The Meadowlark Bar.  Friends and family came out to greet me and I was able to indulge in a few Colorado beers to cap my arrival. Meadowlark is a great spot for live music and even though there isn't any draft beer they have a dozen craft bottles you keep your palate entertained. I hate to say it but delirious from the road and drawn by the CO flag on the label, I started with a Colorado Native, which Coors makes with all CO ingredients.  It was a well made lager as most large breweries have great quality products, even if the flavor is lighter.  I'll try not to discriminate against big brewers too much as this is The Beer Less Traveled and not The Craft or Microbrew Less Traveled! I quickly moved on to some "classic" craftbrews with an Odell's IPA (great balanced IPA), New Belgium Fat Tire (Love that roasty malt) and a Oskar Blues Lil' Yella Pils (easy drinking hoppy lager) to cap off the evening. After helping load up the band's gear I turned in for my first full night's sleep in days.

Posted by EdwardValenta at 11:26 AM