Update from the road

So I am sitting here in Christchurch, New Zealand at Pomeroy's Old Brewery Inn enjoying my after work beer and getting geared up to do some writing and I know I am really far behind chronologically with the blog.  I only intended to do an entry or two per week but I have over a dozen entries in the pipeline and basically the website is 4-5 weeks behind real time. The idea here is to just give a little update on where I am at the moment and where I have been as a bit of a teaser of whats to come on the blog.

After a month of driving across America, visiting over 40 breweries, including countless beer samples, I flew to New Zealand and continued on my beer tour's feverish pace.  In the next couple of weeks my writings will drive us up the west coast of the states, fly across the Pacific and introduce us to the beer scene in Auckland, Wellington, Nelson and Christchurch, which filled up my first 3 weeks in Aotearoa, land of the long white cloud, the Maori name for New Zealand. Highlights include the New Zealand Beer Festival and Marchfest in Nelson, which I caught at the tail end of the hop harvest.


My initial goal was to get a job as an assistant brewer here, roll up my sleeves and get dirty in the brew house. Brewery work is not as glamorous as it sounds from the outside, it generally involves long hot sweaty days and nights, mostly cleaning. I met a lot of craft beer folks the first few weeks in New Zealand. At first look the craft beer scene here is a good 10-15 years behind the States but it's on fire as we speak and it won't take more than a couple more years until its just as diverse and exciting. Most of the craft breweries, in this country of just over four million, are one or two homebrewers that "go pro" in their garage or contract brew. Hence, there aren't a bunch of medium to large craft breweries that have jobs to fill. The number of craft breweries over 10,000 barrels a year (Harpoon is 200K BBLs and Sierra Nevada almost one million barrels) is probably less than a dozen.


In total there are about 60 breweries at this time and a lot of them contract brew.  In the end I went to plan B, or I'll call it B+, beer bar work, and got a job at Pomeroy's in Christchurch. Its one of the most respected craft beer bars in New Zealand.  Almost all beers and special releases come through here.  Its a great spot to keep my finger on the pulse of the New Zealand beer scene.  I'll try to go to as many as I can but the rest will naturally come to me, or really to Pomeroy's.  There are other great beer bars in New Zealand and more opening all the time but from what I have seen and heard this is one of the top 5 in the country. Now the plus I mention is because as we speak there is a brewery on a boat headed for Pomeroy's and I'll be here for the install and the subsequent batches of beer that come out of it. B plus indeed!


Christchurch isn't the epicenter (terrible earthquake reference, I know) of New Zealand craft beer but they are home to Harrington's Brewery which is one of the oldest craft breweries in kiwiland. Newcomers Three Boys Brewery and Cassels & Sons Brewery are also putting out great beers, and out at an old airfield Wigram Brewing is part of the craft beer party too. As the second busiest airport in the country Christchurch will be a good launch pad to other beer destinations in the country... and maybe Australia and beyond. I hear they are opening a new craft brewery in Fiji soon, wink wink! 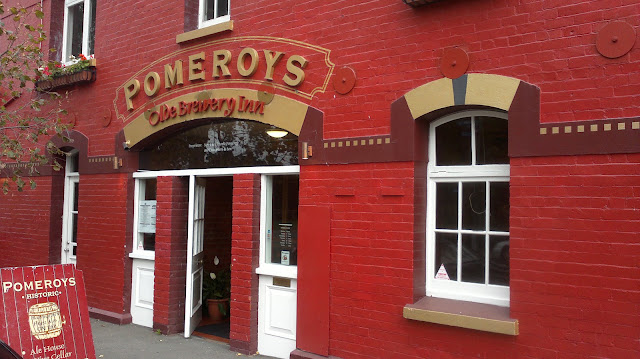 This is also last call to submit you home pub photos for the Beer SWAG From the Road contest. Feel free to leave comments or send me feeback at beerlesstraveled@gmail.com. You can also stay up to date with my travels at beerlesstraveld on Twitter (drop the last "E", ran out of characters) and for more beer eyecandy there are extra photos on The Beer Less Traveled facebook fanpage. I've gotta run and help nail up the new ceiling in the pub before they open in 8 hours. That's a long time to think about what my shift pint will be... Cheers!
Posted by EdwardValenta at 2:56 PM