San Luis Obispo - It takes a lot of beer to make good wine!


As I headed out the door from Aunt Carol and Uncle Brian's to drive north Aunt Carol slipped me $40, "to buy yourself a bottle at the vineyard". Now what is The Beer Less Traveled doing at a vineyard you might ask?! Well as the old saying goes, "it takes a lot of beer to make good wine" so naturally I was going to find some good beer here.  I also should note I don't discriminate too much when it comes to wine... every 20th drink or so ends up being a glass of fermented grape juice and I enjoy the artisanship that goes into wine making. I've even made a few batches of fruit wine from our family acres in Upstate New York. I also can not resist the opportunity to stay on the vineyard overnight with the workers and see how it's all made.  Luckily my cousin BJ worked at Daou Vineyards over the past year and hooked me up with Michael Accurso the vineyard manager and Amy Kolberg who works in the lab at the winery. They opened the doors and showed me around and taught me a little more about the world of wine.  The newly expanded tasting room is gorgeous and is only rivaled by the views. Thanks to Jill in the tasting room for the wine tour as well. ...and Aunt Carol, your $40 was well spent on a bottle of Celestus!

Even though Mike makes his living on wine he is also a big beer fan.  Like I said it takes a lot of beer
to make good wine and there is living proof all over wine country.  Luckily for the vintners of 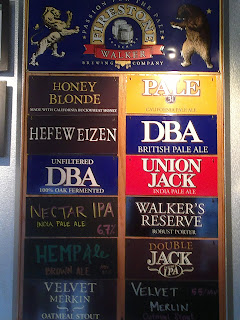 California's Central Coast they have one of America's most respected craft brewers right in their back yard. Being from the east coast Firestone Walker Brewing Co. wasn't really on my beer radar until recently. I had heard them mentioned for winning some medals but that was about it. Then at the 2009 Craft Brewers Conference in Boston I found myself in one of those moments where it felt like I was in the eye of the craft beer storm that had been sweeping America that last couple of decades. I was seated next to Dan Kenary from Harpoon Brewery and Nick Matt from FX Matt/Saranac Brewing (lobbying for Harpoon cans that coming Summer!) The panel was about the future of craft beer and included Larry Bell from Bells, Kim Jordan from New Belgium, Sam Caligione from Dogfish Head and David Walker from Firestone Walker. He was well spoken and I liked his insight and story. Then seeing their beer reach New York soon after they crept onto my must see list. Firestone Walker brewed its first beer in 1996 and hasn't looked back.
I phoned ahead and set up a tour once I knew my eta. Mike was all in when I asked if he wanted to join me for some samples and a tour of the brewery. We arrived and had a few minutes to kill so we had a few samples while waiting. Laurie took care of us and got us through their session beers which were somewhat new to me since most of the far distributed beers are bigger flavored, higher alcohol brews. I like the fact that they don't try to sell the lighter beers 3,000 miles away as they don't travel as well as barrel aged porters might. Keeping it local and keeping it fresh, gets my vote. As we finished our samples Sara came out and outfitted us with some snazzy eye protection and took us out back for a tour.
We timed our visit perfectly or awfully depending on your perspective. It was the last day to see the "old" tour room as it was being renovated to make room for the brewery and moving across the street to a new visitors center and restaurant the next day. A week or two later I would have been one of the first to see the new layout but it was nice to see the old one in hopes I can compare it to the new one on my next visit. With the new addition they are hoping to brew 180K barrels in 2012, now that is some serious beer! They also were in the planning stages of a new beer fest. The region is used to seeing many wine festivals but lacks a good old craft beer fest.  Another item to add to my craft beer "to do" list.

Sara was a great guide and as fellow Cicerone (aka Beer Sommelier) we were able to "geek out" as we went through the process and all the equipment.  It was also cool having a winemaker on the tour since Mike's knowledge of fermentation from a different angle brought out new questions on the process. Expansion was in full swing while we were there with the foundation for the new brewhouse being poured that week. I also got a close up of their unique barrel aged fermentation and blending process. Something born out of the Firestone connection with wine and the brewery's location in one of California's bigger wine regions.

About 20% of Firestone's DBA is fermented in oak barrels and then blended with the same beer that fermented in stainless steel. These guys focused on mostly one small range of beers when they started allowing them to fine tune their beers.  The payoff was owning that category at beer festivals raking in heeps of rewards. They are branching out these days more but their pale ale and barrel aging roots are well intact. Head brewer Matt Bryndilson has been named America's best brewer twice in a row now, and three times all together. A serious accolade considering the field of talented brewers across the nation and world.

How could a day at a brewery and a winery get any better?  A house party with the winemakers! We ended the evening with some good homemade eats and all sorts of beverages. I shared a few of the beers from my travels and they opened up some wine. I can't say too much as notes are bit thin at this point but I know we cracked open a bunch of beers from my travels including New Belgium's 1554 and a Belgo IPA, a Funkwerks Saison and few others. I also have to look more into Tri-tip cut beef, Nara '05 & '07 wines, Left Coast Cellars, Chateau Margene and The Murder City Devils... there might have been some home brew, champagne and a few shots too! A big thank you to everyone in SLO for hosting and sharing their knowledge and appreciation for wine and beer, I learned a lot. I hope to return someday soon. Cheers!


Posted by EdwardValenta at 4:01 AM