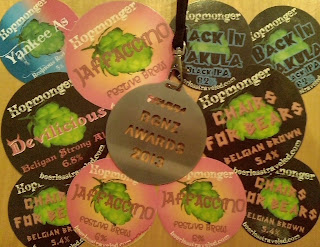 As the last chapter of my New Zealand adventure I decided to launch a series of beers under my own label - Hopmonger. All were brewed at The Christchurch Real Ale Co aka The Twisted Hop, where I was the assistant brewer, and are available for purchase through BeerNZ. It has given me the opportunity to showcase regional ingredients that I've encountered through my travels while intermingling them with more familiar flavors and styles from my home in the US. It was also a learning experience from yeast management and brewing techniques to graphic design and sales and distribution in a foreign country. I'm glad to have had the opportunity to launch this project and I am grateful to my friends and family for their support. New Zealand is a wonderful place and has a vibrant craft beer community. It has been a pleasure to be a part of it over the past year.

My plan was for a hoppy dry India Brown Ale showcasing nearby Gladfield Maltings Brown malt which I really liked. The beer didn't attenuate quite as far as I wanted and ended up being a very balanced sessionable brown ale with just a lingering bitterness that grabs you at the end. To answer a frequently asked question, I named the beer before the New Zealand anti drinking campaign of the same name. Even though it was realized pre-release, changing it was out of the question, but I'm grateful for all the free advertising. In a side story the name of the beer was almost changed to "Last Call" as my cell phone met it's demise when it dove into the mash tun as it was filling!

The Twisted Hop Pub in Woolston was planning a July 4th American style party and asked me to do a beer for them. Rye beers are recently popular in the US and I figured a heavily American hopped rye would fit well. And red of course since Blue and White beers are a bit tougher fit this time of year! Little did I know a half dozen other rye beers were in production in NZ at that time. It's a nice example of the global reach of craft brewing and shows styles are no longer unique to one geographical area. I also learned a lot on this brew. A malt bill with 45% rye is sticky and gave me my first stuck mash, lower yield/alcohol% and made me late to work at my second job! This is a beer for hop heads, its dry and bitter on the finish. Try with some sharp aged cheddar to wipe the hops off your tounge!

Refusing to name a beer "I Love Aileen" after many requests by my girlfriend, this beer is instead titled after her favorite show's protagonist and is as close as she is going to get! Also my first choice Back is Black was already taken. It is a big hoppy black bitter beer to get us through the rest of winter. It showcases Australia's Stella hops that wowed me after having a single hop version in Beechworth Victoria on holiday this summer.

Silver medal winner at the New Zealand Beer Awards! Thank you to Matt Kamstra for helping me zest 15 kilos of Jaffa Oranges for this brew. An oatmeal stout base with coffee and orange zest. The coffee is the most pronounced flavor but a good nose will get the orange essence just after the beer hits the glass. A sweet chocolate flavor completes the blend. Ironic that the "Hopmonger" gets the best showing for his un-hopped beer!

Finding myself on a Belgian beer kick lately I wanted to brew a big hoppy Belgian style beer. This brown was a small batch made to build up the yeast cell count needed to brew that beer and see how it behaved in the brewery. The name is a bit of a cheeky play on the Kiwi accent... thankfully Kiwi humor often involves taking the piss out of themselves. Cheers for Beers!

My final brew and possibly my favorite. It pours a dark gold with a ruby hue in the light. Higher mash and fermentation temps let the spicy and fruity characters of the yeast shine through and even at 50 IBUs it doesn't come across as overly bitter. A kitchen sink of all my leftover hops went in for dry hopping. I've had so much fun with the Hopmonger range that it feels bitter-sweet to say this is the last brew... for now. I am fully open to future international collaborations as an excuse to travel. Thank you for enjoying my parting gift New Zealand. It's been a wonderful experience!