The thought of New Mexico often conjures up images of deserts, cacti, adobe houses, burritos, and red clay landscapes baked in the hot sun. That's what I thought of, even though I had heard they skied there. It's not that they aren't know for snow or skiing. Taos Resort is a very well known ski mountain and until recently was infamous as one of the last few areas that prohibited snowboarding, depending on your point of view of course.  So I wouldn't say I was surprised to drive into snowy landscapes on my first trip to the southwestern corner of America, but it still makes you stop, think for a minute and scratch your head. My friends Katie and Talee moved there years ago so I have heard enough about New Mexico to have some idea of what I was going to see. I was just glad that I had made a little extra time in my itinerary to stop by and check the place out, even if it was only 24 hours. By the time I crossed the northern border from Colorado it was dark, adding to the mystery of the place. From what I could tell the road had patches of black ice and blood red clay across it from time to time. "Caution Elk Crossing" signs dotted the side of the road. Out of nowhere a pair jumped out of the brush on the side of the road and I slammed on my brakes.  Luckily they didn't even cross the road but for the last hour of my drive I was extra alert, half hoping not to see one, afraid of the damage it would do to my car, half hoping to fully catch another glimpse of these majestic creatures.  I did get to see two more, a big fella standing in the shadows on the side of the road and a dead one a few miles later that was obviously on the losing end of a collision with some unlucky driver.

I arrived safely, just a few hours behind schedule and Talee and Katie received me happily.  Talee cracked some Marble Brewery IPAs and we got up to speed on my travels and their careers. Katie works for Los Alamos National Laboratory, Talee runs his own web development company (check out his killer side project: Gear Institute) Katie was joking that Talee was just skiing all the time. Which was mostly true, he had been several times the last week, taking full advantage of the good snow they had been getting, much more than all the dried up areas to the north. I hadn't planned on it but when he looked across the table and said with a sly smile,"want to hit the mountain tomorrow?" I hesitated just a second, worried about my budget and falling behind on my trip, and my legs giving out after three straight days on the mountain, and said,"Sure! Where would we go?" "Santa Fe Skibowl, our hidden gem..." he replied with an even bigger smile. That was that, the plan was set, off to bed, early to the mountain and then some breweries in the afternoon. Definitely my kind of day! 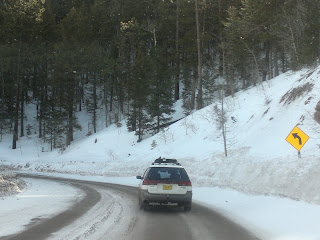 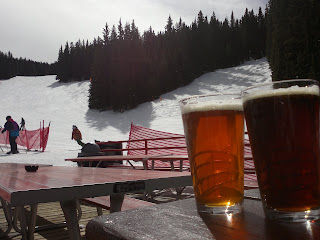 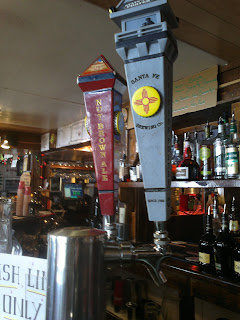 The next morning, the sun rose and quickly melted the frost that had formed overnight. Katie went off to work and Talee and I drove a few miles into town and filled our bellies with massive breakfast burritos smothered in green salsa at Tia Sophia's. The skibowl is a half hour out of downtown and Talee gave me the quick tour as we left town.  Plenty of adobe buildings dot the small city, sufficient to satisfy my preconceptions. It's a nice place filled with a lot of art galleries, bars and restaurants.  There are some cool festivals throughout the year. It was also quiet being winter time.  "The Texas don't come this time of year", Talee said. Santa Fe fits one of my travel mantras, stick to the shoulder seasons.  Prices are lower, you avoid the crowds and most places are still very enjoyable.  If you didn't care about skiing I'd say late Spring or Early Fall would be ideal times to visit.  We wound up the road out of town into the National Forest and started climbing.  The base of the ski area is almost 3000 feet above Santa Fe, which is no slouch, settling in at 7,200 feet about sealevel itself! As we climbed the snowbanks grew and grew.  I was getting giddy.  Being midweek there was no one at the mountain are we did lap after lap up and down the mountain never waiting in line. Cutting fresh lines through the trees.  After several runs we took a break and hit up the little snack shack restaurant at the lodge.  I couldn't ask for anything more, they had local craft beer and tamales on the menu. I had Santa Fe Brewing Co's Pale Ale and Talee had their Brown Ale. Both were delicious, but considering the scenery and the company, anything would have tasted good that day! We snuck in a few more runs before calling it quits and heading back into town. 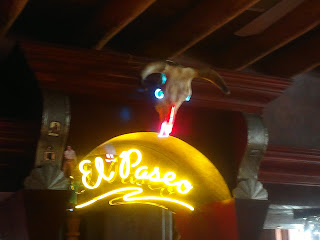 Our first stop was Talee's favorite local, El Paseo, for some tacos. You could tell he was a regular by the banter he encountered the moment he walked in, from the old barfly at the door, to the couple at the bar to the owner Matt seated under the skylight reading the paper and eating his own plate of tacos. A regular Southwestern version of "Cheers!"  Not exactly a craft beer bar, though Matt says they want to add some taps, they still had a few good bottles. I had a Rogue Dead Guy, which I didn't realize only came in 22oz bottles in New Mexico... good thing Talee was driving! Refueled it was time to check out the local beer scene.

Marble Brewery's facility is in Albuquerque, an hour southeast of Santa Fe, but they have a tasting room overlooking Santa Fe's town square. Emily was our enthusiastic bartender and walked us through their beers. They also own Blue Corn, a brewpub across town and they had one of their beers on tap as well. In warmer weather Marble's deck is definitively a prime spot to have a beer in town!

Next stop was the Second Street Brewery. They have a nice clean 10 barrel copper brewhouse at Second St. and another location at The Railyard. They are a creative bunch with different beer themes each month.  It was "The Parade of Pales" the month I was there.  Half a dozen single hopped pale ales were being offered so you could pick out the nuances of each style of hop.  Talee and I got a quick look into the brewery as well as the pub.  Rod the brewmaster was finishing up some tax paperwork and apologized he couldn't hang out... pesky taxes!  But his friendly assistant brewer, John, showed us around and even let us sample some Apollo hopped Pale Ale off the conditioning tank. Can't beat super fresh beer!

Santa Fe was really making me feel welcome and making it even harder to leave. After so many different samples I really needed to take a break and eat a bit before leaving so I decided to extend my short stay a few hours longer so I could let Katie finish work and say goodbye. OK! ...and have some more great Mexican food. FINE! ...I admit it, and see one more brewery too, why not!

We went to Blue Corn Brewery to grab some dinner. (Read: More burritos!) The food was great and so were the beers.  I got to see a nice sunset, fill my belly and share some more beer with some great friends.  Now I could leave fulfilled... but only for a little while.  I will have to return to New Mexico some day, but for now, the road! The Grand Canyon was waiting...

Posted by EdwardValenta at 3:28 PM