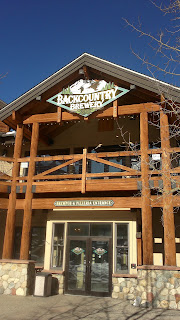 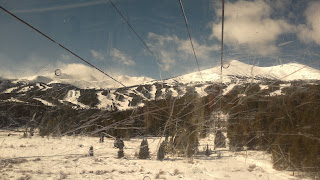 First off... if you have more than a week in Summit County get an Epic Local Pass and enjoy all 5 resorts there. You break even at 5 days. And if you are lucky enough to quit your job and travel across the country hitting breweries and ski resorts you can cash in at 3 resorts in Lake Tahoe too! This was my second trip to Summit County and it was even better than the first time... which is saying a lot!


My first day was at Breckenridge. Not the best day on the mountain as it was cold, windy and firm but the new edge on my board helped me enjoy a full bluebird sky. On the way back to the highway I stopped off at Backcountry Brewery in Frisco, CO which I also checked out 7 years ago with my family. The memory of my experience from that trip has faded significantly, but I can say for certain that this trip was a pleasurable one! The cellar guys from New Belgium (see Ft Collins post) also had hit "Breck" that day and we got to sample all the beers and chat with the brewers Alan and Wes as well and try a few up and coming beers they had out back. If you're really nice they will let on where the good powder is... or maybe not!


Ptarmigan Pils - Simple, well made, good starter
Wheeler Wheat - Orange peel and coriander
Switchback Amber - Pretty mild, a good session beer or stepping stone beer for new craft drinkers
Telemark IPA - Really nice, hoppy, dry and balanced, my pick!
Peak One Porter - Also quite good, very roasty dark brew
Doppelbock - Seasonal, nice beer, tastes like Germany!
Barleywine - A bit lighter body than what I've had but tasted great
Bourbon Aged Barleywine - A good thing made even better, nice bourbon flavor compliment
Saison w/ Brettanomyces - Sour and a refreshing change up at the end of the session
ESB - Great balanced, not too much of any one thing, as it should be
Breakfast Stout - Made with Breck Coffee, LOTS of coffee

Seven years back we also went to Dillon Dam Brewery but like I said there isn't much I can recall at this point.  They get good reviews though. Also in town is the Breckenridge Brewery. You can also hit their production brewery/restaurant in Denver. Also if you headed back to Denver from Summit, Tommy Knocker Brewery is in Idaho Springs, only a couple minutes off the highway.  I checked those guys out in October after hiking the hut trails near Vail. I DO remember getting a mix pack of Tommy Knocker 5 years ago and their Maple Porter is the one that stuck in my memory.  Fellow Harpooner John Baker also has had this beer and it partially influenced his home brew recipes that eventually became 100 BBL #35 Catamount Maple Wheat . Ideally you don't have to fight the traffic on I-80 and can stay close to the mountains, there is enough good beer to get you through until the next day on the slopes!


Last but not least was Vail. There are a lot of people that rank it as their number one mountain.  I took two days to see for myself and could have used a few more.  With such a dry year I felt lucky that I got a little snow each day, even if it was only a few inches. I was worried the holiday week would make for crowded slopes.  However, the terrain was fantastic and honestly this place is so big it spread everyone out making even the President's Week masses seem small. In the spirit of craft brewing camaraderie I stayed with Mark Freytag who used to be a competing brewery rep for Saranac/FX Matt/Lake Placid Brewery before moving out west to commit to more ski days a year.  Not a bad life as he gets dozens more days in the snow than I do and has a mug on the rack at Garfinkel's, a great Apres ski bar if you want something a little less fancy than Vail's other offerings. He was happy to help lighten the load of beers I had picked up throughout the past week touring breweries. I also thanked him with my last bottle of Harpoon Leviathan Baltic Porter that had aged a year in my cellar. With all the craft brews I brought along we didn't really have time to check out the local brewpub Crazy Mountain Brewing Co. I suppose we'll have to come back again... that would be a pity!

Posted by EdwardValenta at 3:43 AM