I'm not sure if Longmont was such a good day in my mind because of the excellent hard to find beers, the good hosts I met, the weather, or the games... but when I think back it was one of my favorite afternoons in Colorado. I arrived at Oskar Blues' Restaurant Home Made Liquids and Solids to meet up with Nathan Levi their beer manager.  He was busy opening up but made sure to welcome me and get me my first sample, what a guy!
They have 43 taps and while a dozen taps are used to showcase Oskar Blues' beers that leaves plenty of room for guest beers.  As Nathan proudly explained, "Dale likes lots of other beers too, and I get to buy those beers with Dale's money!" Not a bad job if I do say so myself. This day the feature was a keg of Russian River's Pliny the Younger.  I was lucky enough to get some of this a few days before in Fort Collins (see previous blog) but it was nice to try it again since it is a hard one to find. While Nathan finished up a few things the bartender, named Fish, let me try just about anything they had on tap.  I slowly worked through another half dozen or so samples (see below).


Travelling alone can sometimes be lonely but when you're into craft beer you're not far from a friendly face. The bar was quiet when I first arrived but soon was buzzing. The young man to my right had just rode his bicycle 15 miles to the pub from Boulder and was sampling a few beers himself.  We had a great chat and exchanged beer notes. There seems to be a big connection with craft beer and cyclists.  At Harpoon Brewery we sponsored a few great bike rides (check out the prestigious B2B ride, or the more relaxed P2P) and cyclists sipping beers in their spandex pants was a common site in the warmer months in the tasting rooms as well!

To my right were a couple of guys who also were lucky enough to get tickets for the Pliny the Younger tasting event.  They were in high spirits, and once I shared with them my ongoing adventure, they gladly gave me their favorite beers and breweries to check out.  Suddenly one of the waitresses got on a microphone and announced they had someone taking the "Wing Challenge".  This just added to the excitement as a poor fellow not knowing what he was really getting himself into tried to get down two dozen atomic hot wings and a beer. The beer is easy but the wings are another story.  I tried this in my more foolish college years and 6 of those puppies got me a picture on the wall in a bar near Clemson. It also almost won me a trip to the emergency room!  All this fun before noon should be illegal. Finally Nathan was ready to show me the brewery down the street. 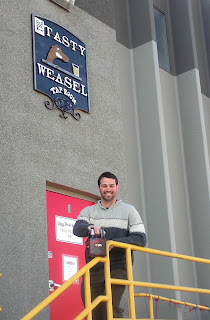 The production facility and tasting room are just a half mile down the road from the restaurant. There was a lot going on and Nathan left me in the capable "hands" of Shawn, Beth and Shannon at the Tasty Weasel Tasting room attached to their brewery. Oskar Blues is a fast growing medium sized craft brewer.  Their claim to fame is their focus on only canning their beer instead of bottles.  This was a significant hurdle years ago with a negative stigma being associated with canned beer but that has changed recently as many craft breweries offer canned beers now.  Oskar Blues' hard work definitely helped break down those barriers. Shawn, who is the first guy I've met to have been proud of his small hands, gave me a great tour. He says they help him work on the machines better! They were installing and working out the kinks in their


new high speed canning line. Its a slick looking machine, I'd love to come back and see it in action! The building is a big one but
they are outgrowing it quickly with new tanks also going in as we speak.  The tasting room is a unique one basically an open air corrugated box inside the brewery.  They had great beers and staff that love their jobs. They had local regulars that loved their local beers. AND they have skee ball!!! I was never much for video games but old school arcade games are my Achilles heel. I must have played 30 games while tasting all the delicious beers on tap. I finally pried myself away from all the fun and went on across town for my next brewery, Left Hand Brewery.

I really have a soft spot for Left Hand because when I was just getting into home brewing in college their founder Eric Wallace was sitting next to me on the plane and was very encouraging. I got to try a bunch of great beers and listen to some good tunes as their taproom is a lively place on a Saturday evening. James at the bar did a great job making me feel welcome and explained the beers as they came out.

They have a nice deck outside as well that I would have loved to have sat at with a beer as the sun started to set over Colorado again.  However, my time in Longmont had come to an end and back to Denver it was.

My time in Colorado was closing fast as well. A few days skiing in the mountains and I would be moving on.  While sad to leave behind all the great Colorado beers and landscapes there is a lot more waiting for me down the road.  After all this adventure is just getting started. See you soon!
Posted by EdwardValenta at 10:05 PM